Halloween Traditions Around the World

One of the best parts of October is celebrating Halloween! In the U.S., Halloween means costumes, candy and creepy décor! But other cultures celebrate this holiday differently. Cultural Care Au Pair is teaming up with NPN to share Halloween from around the world.

In China, the Halloween festival is call Teng Chieh. The Chinese place food and water in front of pictures of deceased family members and in the meantime, bonfires and lanterns are lit to light the paths of these family members as they travel to earth that night.

On Halloween, English children once make “punkies” out of beets and carve designs into them. They would carry them on the streets and sing as they would knock on doors while asking for money. Halloween once became Guy Fawkes Day and moved a few days, but is now celebrated on October 31 in addition to Guy Fawkes Day.

Recently, the American tradition of trick-or-treating and dressing up in costumes has become popular for kids in England.

In Hong Kong, Halloween is known as “Yue Lan” which means Festival of the Hungry Ghosts.  During Yue Lan, it is believed that spirits roam the world that day. Many people burn pictures of fruit or money thinking these images will reach the spirit world and bring ghosts comfort.

On Halloween night in Ireland, families dress up as creature from the underworld and enjoy bonfires and fireworks. Games are also played. Trick-or-treating is also popular in Ireland! On Halloween, it is a tradition to serve Colcannon for lunch, which is a traditional Irish dish consisting of mashed potatoes with cabbage or kale.

Another traditional Halloween dish is barnbrack, which is a fruitcake that has a muslin wrapped treat inside which is said to tell the eater’s future. If there’s a ring, it means the person will wed and a piece of straw signifies a prosperous year.

A western-style Halloween is not celebrated in Japan. The Japanese celebrate the Obon Festival, which is dedicated to the spirits of ancestors. Food is prepared and red lanterns are hung. These lanterns are set to float on rivers and seas. A fire is lit during the festival to show the departed where their families can be found. 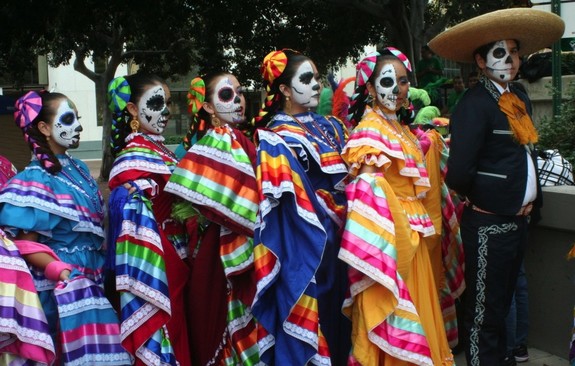 In Mexico, El dia de los muertos or Day of the Dead is a holiday honoring the dead. It is a three-day celebration that begins on Halloween night when the dead are believed to return to their homes. Families create an alter that is decorated with pictures, flowers and favorite foods of the deceased.

***NPN would like to thank Cultural Care Au Pair for sponsoring our sold out "Halloween Around the World" at GEMS World academy. For other NPN sponsored Halloween events, please check the NPN calendar.