Summer is around the corner and our children are finally able to get outside after a brutal winter.  However, they may now be exposed to many different plants that can cause rashes that itch and burn.

One of the most common plants that children are exposed to is Toxicodendron radicans,  commonly known as poison ivy. We have all heard the saying “leaves of three, let it be!”  Poison ivy is a woody vine with leaves in groups of three (with the center leaf being the longest).  The plant appears red to pink in the spring, turns green in the summer and then from red to purple in the fall.

Poison ivy causes a rash due to exposure to the resinous coating on the leaves called Urushiol.  You don’t have to come into direct contact with the plant in order to get the rash.  Contaminated clothing or contact with a pet that has been exposed can also cause the rash.

Once you come into contact with the oil or resin from the plant, it is important to decrease the amount of exposure as quickly as possible. Remove all clothing that had contact with the plant and wash with detergent.  If the clothing is not washed, you can be reinfected months to years later. The skin should be washed with soap in cool to cold water, or the plant oil can be removed with rubbing alcohol.  Animals are not affected by poison ivy but can transmit the oil to humans.  It is important that exposed pets be given a good bath; however, be sure to wear gloves when bathing our furry friends.

Once exposed, the rash can appear as soon as several hours later or up to 10 days later, depending on the person’s sensitivity. The rash is usually resolves on its own within two to three weeks. The rash of poison ivy often looks like a line of blisters, but when the resin is spread from one area to another by rubbing, it can appear as an itchy, red, swollen patch.  The fluid from the blisters does not spread the rash, and the rash itself is not contagious.

Treatment of poison ivy depends on the severity of the rash. Topical treatments such as over the counter hydrocortisone or topical diphenhydramine can help reduce the symptoms. For blisters and itching, one can apply a “burrows solution”  by dissolving Dome-Boro tablets (available at the pharmacy) in a pint of water, soaking gauze in the solution and applying to blistered areas two to three times daily for 20 minutes at a time. In severe cases, a dermatologist should be consulted since oral prescription medications can improve the rash quickly. 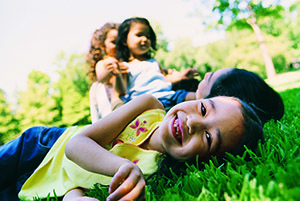 The spring and summer can be a great time to be outdoors with the kids, but pay close attention to your surroundings and make sure you are aware of what plants your children or pets may come into contact with.

Dr. Emily Rubenstein is a dermatologist with the Swedish Skin Institute at Swedish Covenant Hospital. She provides medical and cosmetic treatments for adults and children (ages 2 and older). For more information, visit SwedishCovenant.org.