For children, fever is a normal response to illness. But for parents, it’s a major cause of anxiety and visits to the pediatrician. 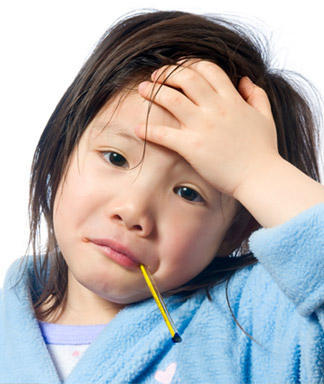 Fever is a physiological mechanism that helps fight infection and is defined as a body temperature greater than 100.4 degrees F (38 degrees C).   In and of itself, fever is not known to endanger a generally healthy child and actually may benefit kids during acute illness.

High temperatures do not always correlate with the severity of illness. There is no evidence that fever worsens the course of an illness or that it causes long-term neurological complications.  Although many parents administer medications like acetaminophen and ibuprofen to a child with minimal or no fever, the primary goal of treating the child should be improving his/her overall comfort rather than simply bringing down the temperature.

How can parents decide whether to give medication to a feverish child?

Consider the child's general well-being, his or her activity level, and the appropriate intake of fluids to maintain hydration. Don't wake children up to administer a medication for fever. The only exceptions to these rules are children with chronic health conditions such as congenital heart disease or immunologic disorders or infants under two months. In these cases, call your child's doctor if the child has any temperature above 100.4 degrees F.

Administering a safe dosage of ibuprofen and acetaminophen is critical.  Up to half of parents administer an incorrect dose of these medicines to their child, with as many as 15% exceeding the recommended dose.  Parents must understand that the correct dosage is based on the child's weight, and that an accurate measuring device, such as a medication syringe, should be used to measure the dose.

Acetaminophen and ibuprofen, when used in appropriate doses, generally are regarded as safe and effective agents.   However, as with all drugs, they should be used judiciously to minimize the risk of adverse drug effects and toxicity.

Parents frequently ask the best way to take a temperature in their child.  For young children (birth through three-six months) a rectal temperature is always most accurate.  Children six months through 5 years can have axillary (under the arm) readings, and children greater than five years can have oral readings.