When parents fight on the playground 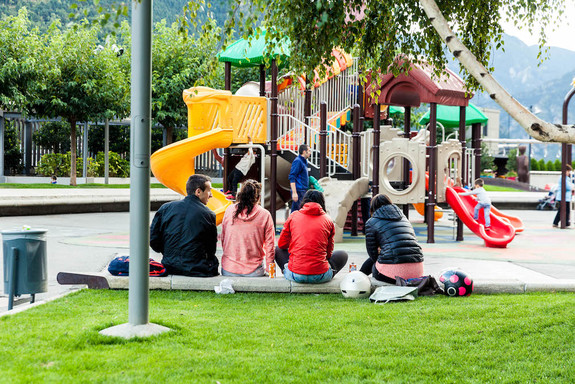 It was Father’s Day morning, so I took our 13-month-old to the park for a little father-son bonding. It was early, so I was surprised to see a few families already camped out near our favorite pieces of equipment. What I wasn’t surprised to see was one mom with a phone pressed against her ear and paying little to no attention to her young son. If you’ve read my blog, you know one of my pet peeves is parents focusing on their phones instead of their children, so the sight of this woman on her cell while this young boy kept asking if he could play with us really annoyed me. I felt bad for this little boy—who doesn’t want attention?—but I just wanted a little uninterrupted father-son time on Father’s Day.

Well, that didn’t quite happen.

Using a stick he picked up off the ground, my son was doing his best drum solo effort on this small rope swing when the little boy came over. Again. He took the stick from my son and after fiddling with it for a second, he turned it toward my son and hit him in the middle of his chest. Thankfully my son wasn’t hurt, although he had that why-did-you-just-do-that look on his face. Clearly, this other boy had no malicious intent, but if I (a first-time dad) see someone do something that could possibly injure my son, and especially if this person should have been supervised closer, the quiet and reserved part of me that most people know will quickly disappear.

I can’t remember the exact words I used toward this boy after checking to see if my son was okay, but it was to the effect of, “We don’t do that. It’s not nice to hit other people.” The boy’s mom had pried her phone off of her ear long enough to hear me speaking to her son, and the gloves were off. Her defense was that she saw my son throwing wood chips before her 3-year-old hit him with the stick, so therefore my boy wasn’t innocent either.

My response? I told her that her child was older and should know not to hit people with sticks. Beyond that—and I knew this was my chance to stick it to her—this all could have been avoided if she wasn’t so focused on her phone. “You’re an a&*%$#@,”  she told me as she grabbed her son and left.

Thankfully I’ve avoided further conflicts with parents since this episode, but I’m sure it’s just a matter of time before my son or someone else’s child will do something in a public place that will put me and another parent in what Catherine Main, Senior Lecturer and Program Coordinator at the University of Illinois at Chicago College of Education, refers to as “incredibly awkward and uncomfortable” situations for parents.

Main offers tips that could make these situations a little easier for everyone:

Keep your cool. “The key to the situation is for everyone to keep level heads,” Main said. “A 3-year-old does poke others with sticks. It doesn’t mean they’re bad children. It also doesn’t mean their parents are bad people. It’s part of their developmental process. What happens if I poke this little guy with a stick?  … There’s no malice involved. They’re just experimenting. The frustrating part is probably that this parent is on the phone and not guiding her son’s exploration and experimentation.”

Safety first. “As a general rule, I think parents should be very cautious about (disciplining other children),” said Main, who has a 22-year-old son and an 18-year-old daughter. "But always err on the side to make sure everyone is safe. You could have just picked your son up and moved him away from the situation that wasn’t safe. That would have been modeling for the other child.”

Support other parents. “It’s really important that parents have a lot of empathy for one another—and try to be supportive of one another,” Main said. "This is not easy. There are not right and right wrong ways all the time. You also have to be able to forgive yourself, because you’re going to make a lot of mistakes. And that’s okay. Your kids will forgive you.”

Walk the walk. Main added: “The key thing is always keeping in mind I want my child to realize that 1) I am a safe adult and always will be that safe adult and consistent and calm, and 2) remember, they’re watching you and that’s really where they learn. You can think you’re telling them something, but they learn from watching you.”

It seems like both me and the mom I got into the confrontation with on Father’s Day have some room for improvement. Make no mistake, there will be plenty of opportunity for that.

To the parents addicted to their phones

Dads shouldn't get credit for showing up