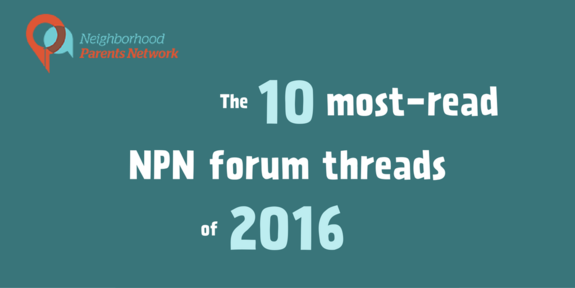 However you feel about the events of 2016, you can't say it was boring. NPN members on our discussion forum certainly reflected the year's tensions, drama and uncertainties, posting questions and comments about everything from the presidential election to the CPS teachers' strike that wasn't to concerns about violence in their neighborhood.

But many of the most popular posts on our forums also highlight the perennial issues of being a parent in Chicago: Is my neighborhood school any good? How do I rekindle a lifeless marriage? Is my toddler's behavior unusual? Regardless of the issue NPN members post about, you can count on fellow parent members responding with advice, support and, yes, some contrary opinions.

This year's 10 most-read threads on the NPN forum (which recently underwent a major upgrade) reflect what Chicago parents cared about most this year, along with some fun diversions that kept our minds off the events of this never-boring year.

10. What's the worst wedding drama story that you have to share?

You think you have a great wedding story? It'd be hard to top the hilarious anecdotes shared in this thread, from a bride's hair catching on fire to epic wedding party brawls.

CPS parents were on pins and needles from as early as August until it was finally announced in the wee hours of Oct. 11 that the strike would not happen. In this thread, parents shared whatever information they had to help keep everyone's anxiety at bay.

8. Are city SFHs coming down in price?

The consensus on this thread: Yes, city homes are coming down in price. Also, there are a lot of Redfin addicts on NPN!

Few Chicago neighborhoods are immune from Chicago's dramatic uptick in violence this year. In this thread, NPN members share info, including upcoming CAPS meetings, and debate the merits of staying in the city or moving to the suburbs.

6. Off to college update

When one mom lamented how heartbroken she is that her daughter is going off to college, NPN members consoled her with kind words and encouragement.

5. Troy LaRaviere out at Blaine?

In a year of CPS drama overload, the ousting of Blaine Elementary School principal Troy LaRaviere was one of the biggest stories. In this thread, parents discuss the reasons and repercussions of his exit.

One of the features that sets the NPN forum apart from Facebook is the ability to post anonymously about your most private dilemmas, and get immediate advice and consolation from other parents. This thread is a perfect example of the privacy and support NPN members get every day!

Sometimes, all the catharsis you need is to angrily type out your frustrations in the NPN forum. This thread is the designated place to do that—our members have posted about inept Uber drivers, garbage-strewn alleys and annoying mommy blogs, among many other irritations.

Parents feared a CPS teachers' strike would happen in May, but the school year ended without one.

The most-read forum post of 2016 underlines a big truth: Marriage is hard; marriage with kids is even harder. But getting support from other parents on your most personal problems? Surprisingly easy when you're an NPN member.

How to keep your New Year's resolution