How I Stopped Worrying and Deserted the Mommy War

My child was formula fed. My child was sleep trained. My child eats food that is not organic. The old me would give you a twenty-minute explanation of how each of these things happened (although never originally part of my plan). The new me recognizes that you probably don’t give a shit.

There’s been a lot of talk lately about the so-called “mommy wars.” After three and a half years of motherhood and reading the endless stream of social media posts on the subject, I think I have found the root of the mommy wars. We’re so obsessed with being the best parents we can be, we question everything. We question ourselves. We even question what seems right.  But we surely don’t care what you’re doing with your children unless it directly affects ours.

Some days are better than others. Some days you can chalk it up as a win and realize that you’d made it through the day without any major tantrums or guilt that you’ve impeded the development of your child, somehow. But most of the time, we’re desperately seeking validation because secretly we know we’re winging it. Virtually every aspect of our parenting is an exercise in uncontrolled experimentation. Is this restriction on screen time working? No idea. Are these five stories a day at bedtime soaking in? Beats me. Is the extra income provided by my job worth the trade-off of less time with him? Good question. Will any of this organic food make him any healthier as an adult? Ask me in twenty years…and I still won’t know. That’s the thing about raising a child—you don’t get to rewind or perform a do-over, so you never know where the path not taken leads. So we’re left to going with our gut and hoping for the best.

And we’re terrified that everyone will see right through that, and call us out on it. Thus, we hunt for validating studies or Huffington Post op-eds that conform with our impromptu parenting choices. But as the saying goes, opinions are like rear ends (everybody has one) and you can find a study that says anything. So inevitably, conflicting opinion or evidence will pop up on your Facebook page.

“Here it is!,” you think. “They’ve finally figured out that I’m a fraud!” No doubt, social services has already been alerted to your unfit mothering. But rather than come clean, you double down. These are not simply conflicting opinions, they are personal attacks. These are Mean People who dare to undermine you, Mother.

Congratulations—you’ve enlisted in the Mommy Wars.

Except, there is no war. There are no attacks. There are simply millions of mothers with millions of opinions, all of them with only slightly more than no idea what they’re doing.

I’ve been guilty of it. I’ve posted the Formula Child Turns Out OK, Studies Show Working Moms Have Awesome Kids, and This Much Screen Time is Fine stories. So, I’m sorry.

But as of today, I’m officially a deserter in the Mommy Wars. Frankly, there’s no such thing—it’s a creation of our own to distract ourselves from our own insecurities. I’ll probably never get over that insecurity, but I’ll try. In the words of David Foster Wallace, “you will become way less concerned with what other people think of you when you realize how seldom they do.”

Well, except for the anti-vaxxers. You people, are insane.

This article will be included in our Fall Issue of Parent to Parent. Want to hear more stories like these from parents like you? NPN members receive our Parent to Parent newsletter chock full of important parenting, school, childcare and activity ideas! Not getting your copy at home? Email info@npnparents.org to get the next issue by mail. 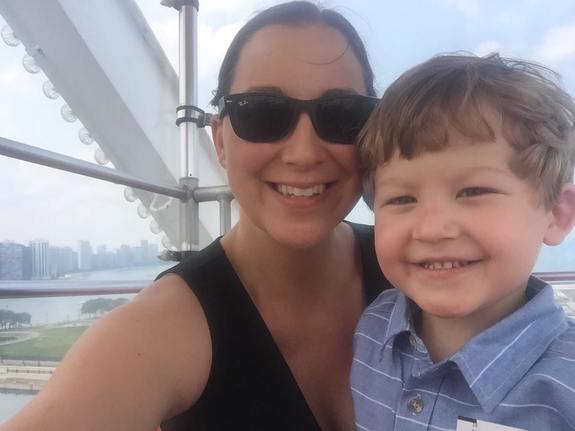 Tell us your story! Write an article for P2P! Click here for our submission guidelines.
Christa joined NPN while expecting her son in 2011. She has a passion for connecting local families and trying new things. Born and raised a Chicagoan, she considers herself a “lifer” and loves frequenting Lincoln Park Zoo, as she did as young child. A big picture girl, tv fanatic and philanthropist, Christa enjoys drinks with umbrellas, insane amounts of caffeine and watching college basketball.  She lives in her dogs' Lakeview home with her son and husband.
Posted on July 02, 2015 at 9:38 AM